Out of the Blue will be Released Soon

February 17, 2020
There has been a long and winding road to getting my fiction represented and published. Now, I can say: Yay! One Odd Bird Press, an innovative new publisher that digs oddballs and the unusual in writing, has picked up my two novels, "Out of the Blue" and "Pine Barren Blues." In fact, I'm creating a series around each novel that will be published over the coming years by One Odd Bird Press.

"Out of the Blue" is definitely odd. It breaks barriers in what we expect as readers. It crosses boundaries culturally and bends genres freely. I did not set out to create an odd novel, in particular but that is the way the book turned out.

The protagonist, Earnestine, who likes to be called Tina, is a Negro teenager living in Mobile, Alabama. Yes, I said Negro. The story is set in 1947. It takes place before we dug in deep, once again, for our Civil Rights and the Civil Rights Movement took hold. Her story begins a bit after World War II. ended. It is set on the water, in the Gulf Region, and that unique area sets up the story. Her father, a Shrimper and Bluesman, comes across a Siren out at sea, who happens to have been attracted to his singing and the rest, is the battleground that becomes Tina's life. She wants her father back in her life and back in her family's life too. She must go through many twists and turns on the Greek Island of the Sirens, to make her wish come true. Tina goes from having awful things happen to her, because the beasts and creatures on the island are busy, to making things happen. In short, she finds her inner power and Black Girl Magic, through her search for a father.

Singing is more than a mere backdrop for the book. Singing is everything - it represents the voice's ability to transform and soar through spirit. The singing in the book, from the Siren's to the Bluesman's (Tina's father) represents the power to express and to be who you are. The search for identity is central to "Out of the Blue" and singing is the key.

The novel, my debut novel, my baby, so to speak, will be published March 22, 2020 as a Paperback and E-book. You can pre-order it here: Out of the Blue: a Black and Blues Novel

I love the cover too.  Created by Katie Archambault & Qamber Kids -it's another occasion to say 'Yay' and to be filled with gratitude. 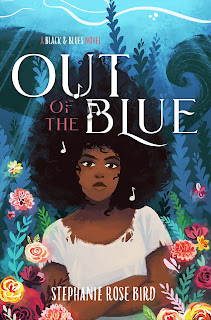